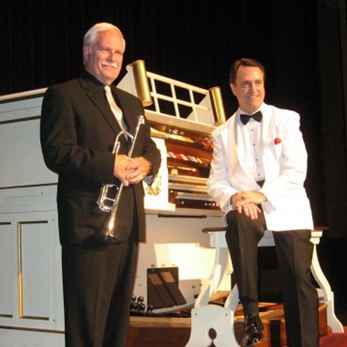 This brand-new “Double Play” program will salute the great Harry James Orchestra, with which Mr. Stine performed and recorded in the 1960s and 1970s.

“This will be anything but an organ recital,” says Ken Double.  “It’s a show that will introduce you to the theatre organ in a new context.”

Ken and Skip have performed together dozens of times since 2007, reviving the sweet trumpet solos on Harry James hits such as “You Made Me Love You” and “I Had the Craziest Dream”.  The duo also has two CD recordings to their credit, both of which feature Ken’s theatre organ and Skip’s trumpet.

Ken Double is a former sports broadcaster and arena organist who retired from announcing in 2008, now devotes himself full-time to his theatre organ career.  Ken also was executive director of the American Theatre Organ Society for ten years until 2016.

Skip Stine is a graduate of the United States Navy School of Music.  He played for numerous big name orchestras and singers in the 1960s, including Buddy Morrow, Frank Sinatra  and Tony Bennett.  His career culminated with a long association with Harry James, appearing not only with the band on the Las Vegas strip, but also in numerous studio recordings and concerts across the US and Europe.  Skip currently teaches music at the Milton Hershey School in Hershey, PA.

“Ken’s last appearance in Pittsburgh (with Venezuelan singer Daniel Mata in May 2017) was such a crowd pleaser and musical triumph,” says Dale Abraham, President of PATOS.  “We eagerly await his new program on March 3rd.”

Admission is $15 in advance, or $20 at the door.  Students are free with ID.  To order tickets online, please click on the following Showclix link: